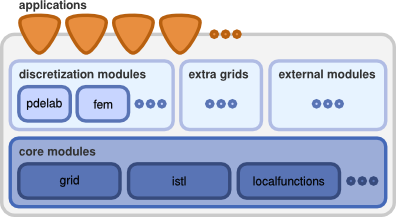 DUNE is free software licensed under the GPL (version 2) with a so called “runtime exception” (see license). This licence is similar to the one under which the libstdc++ libraries are distributed. Thus it is possible to use DUNE even in proprietary software.

DUNE is based on the following main principles:

The framework consists of a number of modules which are downloadable as separate packages. There is a set of core modules which are used by most other packages. The dune-grid core module already contains some grid implementation and further grid managers are available as extra modules. Main discretization modules providing the infrastructure for solving partial differential equations using DUNE are available as separate modules. The modular structure of DUNE allows to only use a small set of th modules (e.g., only the solver module dune-istl or the module dune-localfunctions containing shape functions without for example using the dune-grid or a full discretization module).

For further information, have a look at the main features, read the documentation for application writers or get in touch with the people actively developing DUNE.